VETERAN Eastern Cape filmmaker, Mr Ben Nomoyi, has advised militancy and unity among his emerging counterparts if they are to impact on the sector. 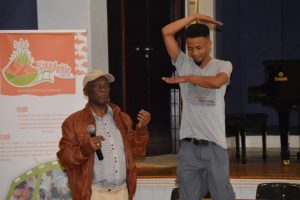 “Mobilise yourselves to be a unified force. You need to be specialists and deliver products that are export ready as your productions need to be of huge economic impact,” said Mr Nomoyi addressing over 50 aspiring filmmakers who had attended the inaugural Eastern Cape Film Festival.

The Film Festival, organised through a partnership between the Eastern Cape Information Technology Initiative (ECITI), Radio Ya Bantu and Tru-FM has been set up as a platform of expression and empowerment for the province’s filmmakers.

Beyond the training workshops provided by established filmmakers Jahmil X.T. Qubeka (Of Good Report), Rolie Nikiwe and Diliza Moabi, there were screenings of movies and documentaries made by the attendees. These were followed by creative feedback/criticism sessions of the productions.

Overall discussions took place during the Film Festival came with the following outputs:

Film Festival director, Mr Nceba Mqolomba of Radio Ya Bantu, expressed great satisfaction with the turnout at the festival. He was even more impressed with the output, the excitement and enthusiasm from the attendes of the festival.

“With what we have experienced here this weekend, the Eastern Cape film landscape will never be the same.”

Emerging filmmaker from Mdantsane, Mr Aubrey Silinyana, best summarises the festival when he says: “I have a finished film that the community still has to see that I have put on hold for many years, I came out of this festival motivated to revive the project and work towards releasing it.

“I also have another film I am making currently but didn’t have enough funding for it.  The presentation by Mrs Nopinki Bentsile from the DTI provincial office was an eye opener about more funding opportunities that I had not yet explored.  I was looking at hiring more people to work in my film and here I was able to find people (among the festival delegates) that can render services to my project – so there were immense networking opportunities amongst us.

“My choice of technology for my film to be shot in December is the DSLR route but I do not have any experience working with it, I was able to meet people who have extensive experience on using this technology.  The input by the special guests, Rolie Nikiwe, Diliza Moabi and Jahmil Qubeka, was a great motivation and it is such as thrill to know that from now on I can have direct contact with the people who have already made it big in the industry.   Halala EC FilmFest!”

Mr Sicelo Mamle, who recently launched his third instalment of his popular movie, Mantolwana, also expressed his appreciation of the festival. He said the Eastern Cape was lagging behind in supporting film and that the initiative should sustain.

New technology on the cards